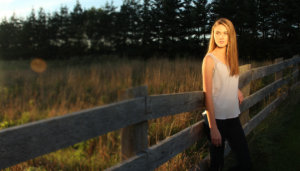 The East Coast Production Group is excited to announce that PEI’s very own JULIA DUNN has been selected to kick off George Canyon’s – Made In Canada Tour at Harbourfront Theatre in Summerside on Saturday, November 3!

18 years old, this singer/songwriter from Charlottetown already has an impressive resume.  Not only does she play multiple instruments, she has just released her first/self-titled debut album.  In 2015 Julia performed a duet with Country Music Superstar Keith Urban on stage at Cavendish Beach Music Festival after winning a radio contest.  Selected from hundreds of applicants, Julia got the chance to perform in front of 25,000 fans!  The moment was posted to Youtube and has received over 90,000 views.  It was also reported by local and National media outlets.

Following Dunn’s performance, George Canyon will take the stage with his full band performing past hits as well as songs from twelfth studio album, titled “Southside of Heaven”.

Tickets to this all ages event are $65.44 (tax/fee included) and are available for purchase at ecpg.ca, by phone at 888-311-9090 or in person at the Harbourfront Theatre Box Office during regular hours.  Doors to the show open at 7:00pm and Julia Dunn will begin at 7:30pm.

Seating is limited so be sure to act fast and guarantee your seat!

For more information on The East Coast Production Group, visit: